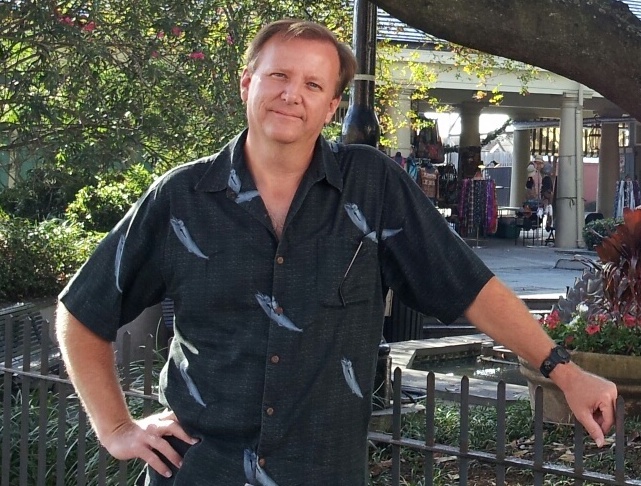 “I live in Branson, Missouri, originally from New Orleans. I’ve been married for 32 years.

I haven’t had very many jobs in my life. Right out of high school I went to work for Pizza Hut. On my job application I wrote “Part-time. Temporary”. Sixteen years later I put the two weeks’ notice in (smiles).

From that, I went into woodworking. I opened up a woodworking company and I did that for 10 years or so.

And then, in 2005 Hurricane Katrina hit my hometown of New Orleans

My wife and I are from New Orleans. So, when Hurricane Katrina hit our hometown we went down there [from Missouri] to help family and the city rebuild.

It was just destroyed. The city was completely beaten to death, flooded, houses gone, you name it. It was unbelievable!

We are very close to our families. At that time my mother and my wife’s mother were still alive. They both had damage to their homes. I have a brother and two sisters that lived there. My wife had a brother and a sister that lived there. Everybody had damages, not just a little, a lot of people had a lot of damages. I couldn’t let my family go through that alone. I was going to go down there no matter what and help them fix that. And even after my family was back in shape, I couldn’t drive away with my hometown just beaten to death.

Let me get into roofing

I looked around and said that there’s got to be something for me to do here for a living and help my town rebuild. There was a blue tarp on every roof and every house, so I said, “Hey, you know what? Let me get into roofing.” I looked in the phone book, called the closest roofing company and asked if they needed help. They said, “Are you kidding? Come on in!”

I got hired and started the next day with no experience at all. They trained me. I ended up being a salesman there. Within six months I was a sales manager. Within nine months I was the general manager of the whole company. I stayed there a little over five years until I decided that I wanted to expand, so I went out to be a licensed adjuster.

I got my license and went to work for Worley, and they set me up with State Farm. I was a catastrophe adjuster for three years for State Farm.

From there I worked for a couple of different roofing companies until I ended up with Madsky Roofing in Dallas, Texas. That was s before MADSKY Managed Repair Program existed.

A good fit for MADSKY

When I started at MADSKY Managed Repair Program, they thought I would be a good fit because I had general manager experience at a roofing company, and I also was a licensed adjuster. And it’s kind of the go between, just like MADSKY is right in between the carrier and the homeowner. So I ended up working as a salesman in the field. I had a lot of success with homeowners and with sales rates. At the end of the pilot program, when they decided to take MADSKY to a full-blown program, L.C. Nussbeck, the founder, asked me to come be vice president of sales for the company. So I was vice president of sales, then vice president of quality control for a couple of years.

Currently, I am an auditor, and I still go out in the field as a trainer. I do training online, and I do estimate reviews along with auditing.

I’m pretty much a self-motivated person. I’m an extremely early-morning person. I’m on the computer at 5:30 in the morning and I do my job every day. I have some inner drive that makes me keep going no matter what.

I love to cook. When I moved out of my hometown New Orleans, I missed the food more than anything else, so I had to learn to cook good Cajun food. I also love woodworking and traveling to places I’ve never been before.”